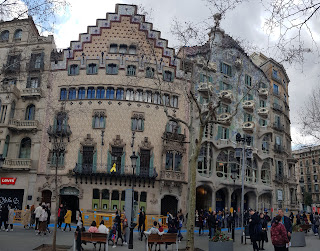 Barcelona is a fantastic place to visit if you want to experience European architecture and culture. Best time to visit the city is from December to Feb. After Feb, it gets warmer. Summers are really hot. I visited Barcelona in January and it was very pleasant between 10-20 degree Celsius. Note: To visit Spain, you will need Schengen visa for Spain. Follow the visa process to apply for a travel visa. From my experience, it was a very laborious process with lots of documents to submit including 6 months bank statements and last 3 years income tax returns filed receipts. Casa Battlo Casa Battlo - This is museum located in the heart of the city that was built by Antoni Gaudi. It is recommended to buy tickets online and plan your visit. Hop-on Hop-off Bus Bicycle rentals Fira Metro Station Park Guell This is a beautiful park designed by Antoni Gaudi between 1912 and 1926. Location is slightly away from the center of the city. But, you can take Metro and reach
Post a Comment
Read more 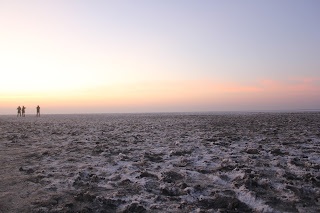 Visiting Gujarat for tourism is a great thing to do. If you want to enjoy food and culture of India, Gujarat is one of the finest destinations. I visited with my family to Gujarat in December 2019. It was a 8-day trip starting from Ahmedabad. Here are few things that we did and I would recommend people who plan to visit Gujarat. Here is the route that we took: Ahmedabad -> Rann of Kutch -> Dwarka -> Porbandar -> Somnath -> Ahmedabad After completing this circuit, we stayed back in Ahmedabad for 2 days to complete Statue of Unity on one day and, Sun Temple, Modhera and Rani Ki Vav on another day. Rann of Kutch We started off from Ahmedabad to Rann of Kutch. This place is 8-9 hrs drive from Ahmedabad. Roads were decent, but, for repair work all along the way. This repair work got us stuck in a massive traffic jam for couple of hours as we approached Bhuj. Tips for Bhuj: 1. Start from Ahmedabad as early as possible - Say, 6am. That way you will reach Rann of Kut
Post a Comment
Read more 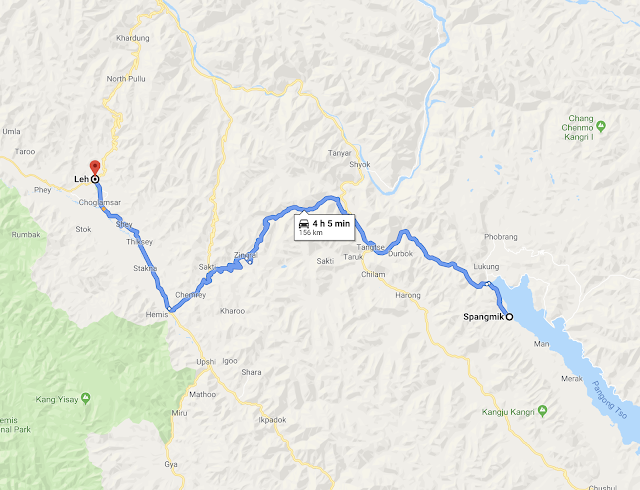 Friday, Jun 21 2019 Pangong to Leh A bridge on the way. DRDO - World's highest Terrestrial Research Center. We had to pass through Chang La Pass to reach Leh-Manali Highway. We got stuck near the pass for an hour as there were a huge pile of army trucks moving. Civilian vehicles were put on hold. Army movement on Chang La Pass Thukpa We started from Pangong at 8am. By the time we crossed Chang La Pass, it was noon. We stopped for lunch a hour before reaching Leh. Thukpa was my lunch. It tastes similar to noodles, but, very plain, bland, and soupy. Drive on Chang La Pass was tiring. Oxygen levels were low and we got tired waiting in the car for an hour. We munched biscuits as we were feeling tired and hungry. On the budget side, cost of cab to cover Nubra and Pangong was Rs.20,000 (we were total 5), i.e., Rs.4,000 per person. Room/camp cost in Nubra and Pangong was Rs.1500 person per night. After reaching Leh at 3pm, we planned to rest for the day. F
Post a Comment
Read more 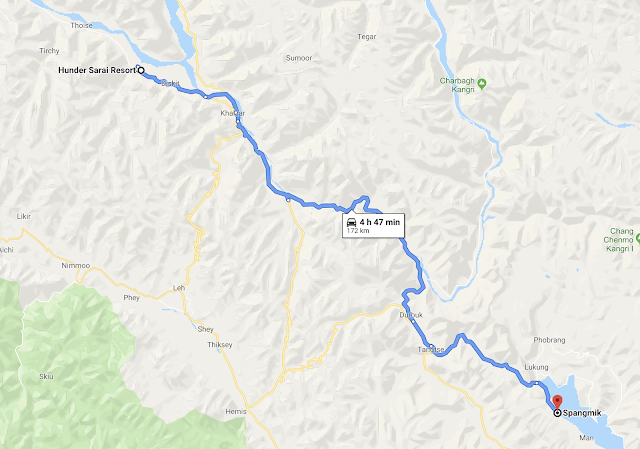 Thursday, June 20 2019 Nubra to Pangong Tso (Lake) Drive from Nubra to Pangong took us about 6hrs. Clear waters of Ladakh Road blockage due to landslide. Dirt road is getting cleared here. Local Tea shop serving lunch Maggi for lunch on the way to Pangong On our way to Pangong Marshy land Wild horses seen in the plains We reached Pangong by 4:30pm. First view of Pangong was breathtaking. Pangong - First view Pangong Lake with campsites Pangong Lake is a salt water lake. Eastern part of the lake belongs to China. Accommodation: There are plenty of accommodations in the form of log houses and camps/tents. It is recommended to pick something that will keep you warm in the night. For me, the night was freezing cold. Similar to my stay in Tso Moriri, headache caught me late in the night. Best time of the year to visit this lake: July to September Note: When we went, we saw lots of camps that were close to the water body being demolished by
Post a Comment
Read more 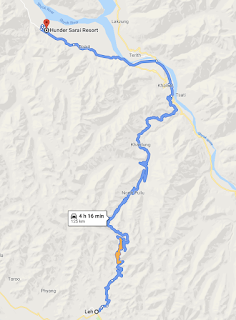 Wednesday, June 19 2019 The driver was supposed to pick us up from the hotel at 9am. Due to brake repair, we were informed that he will arrive an hour late. That driver had completed a long a tiring drive previous night driving another set of tourists from Pangong Lake to Leh. As we were waiting and walking near the reception of our hotel, one person who seemed to be lost walked in. After inquiry, I got to know that he was looking for us. Without knowing his name and he not knowing my complete name, we were all set to start off to Nubra Valley via Khardung La (world's highest motorable road at 18,000 feet. With all the hurry in boarding the vehicle, I forgot to pick my camera battery that I had kept for charging in the room. For next 2 days, I was left with no shooting pictures on my DSLR camera. I had to satisfy myself to my smartphone camera. Leh to Hunder (Nubra Valley) Khardung La (Pass) is an hour away from Leh. When we approached this pass, it started to snow. There
Post a Comment
Read more 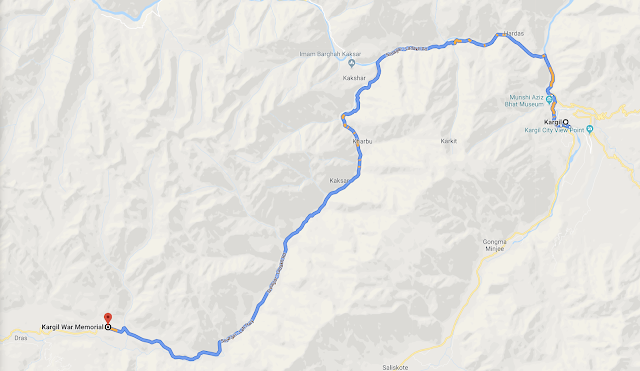 Tuesday, June 18 2019 First half of the day, we visited Kargil Memorial that is about 50Kms from Kargil in a place called Dras. Kargil to Kargil War Memorial We spent couple of hours in the memorial. One should watch a small documentary on Kargil War of 1999. It is informative before walking to the memorial point. Kargil War Memorial Read more about this place here . This is the place where every Indian must visit and show respect and solidarity to our Army. The area where the memorial stands now had come under the radar of Pakistan during Kargil war. We recaptured the place during Operation Vijay in May-June 1999. Bofors gun used during Kargil War, 1999 On our way back from Dras to Leh, we wanted to see the last point of Indian soil. Hunderman is the village that is located in LoC and is the last village of India. Beyond this village is a mountain behind which PoK lies. We were able to see a village in PoK using a binocular that was available for rest
Post a Comment
Read more

Monday, June 17 2019 Our plan was to travel from Leh to Kargil and rest for day. Leh to Kargil: About 220Kms, 5 to 5.5hrs with breaks. Road is good as it is NH1 Leh-Srinagar Highway. We (5 friends) got ready and headed towards Kargil. The drive was very picturesque. We first reached Magnetic Hill that is 30 minutes away from Leh on Leh-Srinagar Highway. Magnetic Hill: My personal opinion - This is optical illusion. Road seems to be uphill, but, it is actually a 2-3 degree downhill. This makes the vehicle move forward. I found confirmation of my opinion online. See article by Vargis Khan here . Next pitstop was Indus-Zanskar Confluence. Indus river has a light green color and Zanskar has light grey color. After the confluence near Leh, it flows upwards and enters Pakistan. It is the national river of Pakistan. Read more about Indus here . Indus-Zanskar Confluence Curvy roads from Leh to Kargil. Border Roads Organisation (BRO) puts up a note saying, "Be soft on my
Post a Comment
Read more 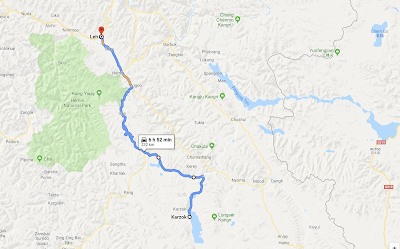 Day-3, Sunday, June 16 2019 I woke up with a bad headache. Hot water bath didn't provide any relief. After having breakfast and sipping hot tea, I was feeling little better. We started from the hotel towards Leh as per plan. The dirt road from Tso Moriri to Leh-Manali Highway was bad. There were 3-4 cabs that started with us towards Leh. Our driver drove in full speed to stay with the group. About 2 hours after we started, our cab had a flat tyre. Other cab drivers helped us to get back on road in 15 minutes. One nice thing that happened on this day was recovery of my camera lens malfunction. With frustration, I accidentally moved the lens manually to do manual focus (instead of auto focus). With this, the jammed motor started to work normally again. I was happy to get this work again for me to click lots of pictures for the rest of my trip. Tso Moriri to Leh via Tanglangla Pass on Leh-Manali Highway. 232km. About 7.5hrs Flat tyre from Tso Moriri to Leh Marshy lan
Post a Comment
Read more 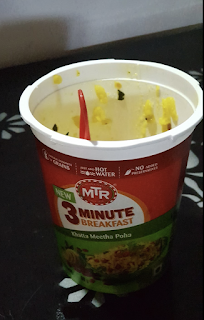 Saturday, June 15 2019 Breakfast - MTR Ready-to-eat Poha. Got ready and boarded the shared cab to Tso Moriri. Made a quick call to family back home to inform that I will be away from cell phone signal for next 2 days. Nubu was our driver for next 2 days. In the cab were 3 more passengers - A couple sitting in the back along with me and a lady from Arunachal Pradesh (AP) sitting in front seat. After 5 minutes on road, we had the ice breaker and for my surprise, I got to know that the couple were from Bangalore. We spent nice time talking and sharing our Ladakh experiences. The couple had already finished visiting Nubra Valley and Pangong. The lady from AP had visited Kargil already. Their visits gave me good information for my upcoming visit to those places. Leh to Tso Moriri - 220km - Took around 6 hrs We reached Tso Moriri by 3pm. First Glimpse of Tso Moriri Tso Moriri with varied colors Blue Tso Moriri Panoramic view of Tso Moriri with mirror reflection We
Post a Comment
Read more 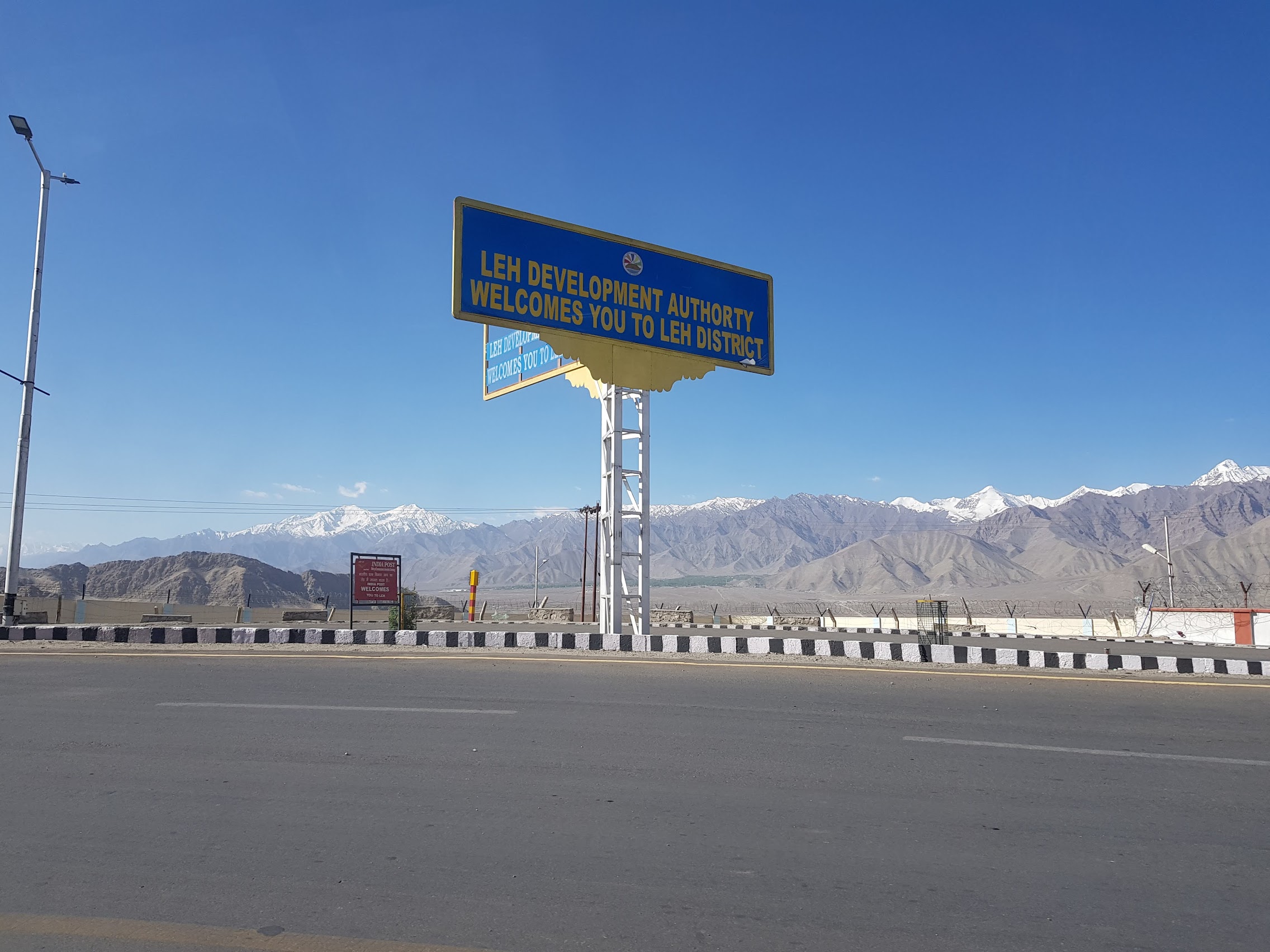 We (5 friends) started from Bangalore on June 13 2019 night from Bangalore to Delhi. My plan was to reach Leh on Friday morning at 7:10am. My 4 friends took the road on Friday morning to drive 400kms to Leh. I reached Leh as per plan. My host (Tenzin) picked me up at the airport. The drive from airport to homestay was 10 minutes only. I stayed at The Golden Apricot on Fort Road. Landed in Leh I was served upma for breakfast. The owner of the hotel told me to rest for the day to acclimatize with the height and weather. Upma for breakfast on Day-1 After resting for 3-4 hours, I was kicking to roam around. I hired a two wheeler and had Google maps as my assistant. Hired 2-wheeler Rode to Thiksey Monastery that is 30 minutes away from Leh, about 15 kms. This ride was the most memorable one for me as I hadn't ridden a 2-wheeler for more than 15 years. With Google maps, I had all the freedom to roam around like a local person. I reached Thiksey on Leh Manali high
Post a Comment
Read more
More posts